First of all let me say that this is a very easy chocolate pie and the filling comes together really quickly.   I chose not to make a homemade crust and it was very delicious.  But something went very wrong and you should know about it so that it will not happen to you!

My mind is always working on something else that I can add to my class that would be beneficial.  Finishing up our egg and dairy unit I was left with two gallons of skim milk and four dozen eggs.  What could I do with them?  Chocolate pudding seemed the perfect answer topped with whipped cream.  Especially since several students thought that beaten egg whites were the same as whipped cream.   So a demonstration whipping cream was needed.    I found several recipes using corn starch as a thickener.  This would be a new ingredient for discussion.

Since the pudding has to be refrigerated for two hours I had to prepare one at home for the first class.  Now think about this I have been making banana pudding for two days and the pudding takes about twenty minutes to come together.  I thought this pudding would take about the same amount of  time.  Boy, was I wrong!  The pudding cooks very quickly and was done before my pie crust was out of the oven.  In the meantime, as the pudding cooled a thin skin formed on the top which I quickly I whisked it until smooth.  I guess I  probably did this  about 4 times not knowing this would ruin my reputation. I really thought I was doing good making sure the pudding stayed nice and smooth.  When the crust was cooled  I poured the thickened pudding into the shell and covered it with wax paper to keep a skin from forming.  Then placed it in the refrigerator for my first block class to taste the next day.

I was so excited the  next day because the pudding I tasted was heavenly and I could not wait to let my students sample it.  I showed my class how to make the crust, then the pudding. And magically  I pulled the pie filling and crust out of the refrigerator that I had made the day before and noticed a lot of jiggling!  What was going on?

Now to the whipped cream which my students were so confused about.    I think it is because the only whipped cream they know comes from a can or is frozen in a plastic container!

Tips everyone should know about whipping cream:

I topped the pudding pie with a beautiful whipped heavy cream.  I cut into the pie and put it on a plate to take a picture and it ran as if it were chocolate soup.   What in the world was wrong?  This should nice and thick.  A perfect piece of chocolate pie.  Well, I served it with no complaints, but I was thoroughly disgusted with the results.  I went back to the blog where I got the recipe and read through almost 200 comments until found  someone else had soupy results. And after googling many things I found the answer. 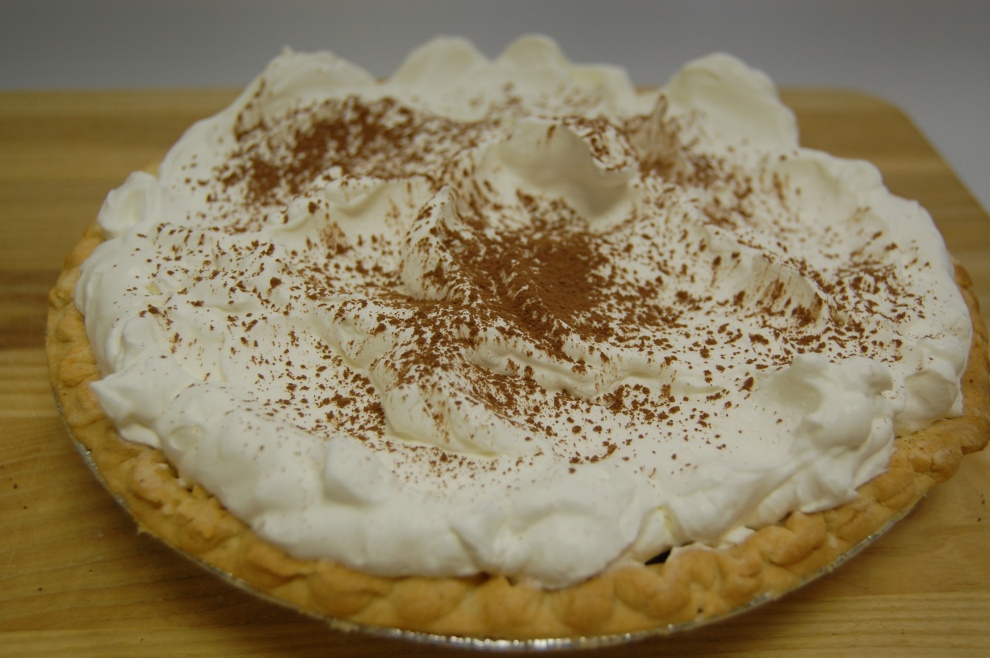 This is the lesson learned:  Corn starch  will thin out if heated at very a high temperature or if  stirred after the thickening process.   So that is what I did,  I continued to stir the pudding after it thickened. So now you know Do not stir even if you think it needs stirring. Check this out for more information.

Adapted from The Smitten Kitchen  or Epicurious

First bake a 9 in pie  shell.  I made 3 .  Two were Pillsbury refrigerated that I put in my pie plate.  Another was a Ritz deep dish frozen pie shell.  Both worked great.  Go for making your own.  I just did not have the time, but I do not think that the taste was sacrificed.  The shells should be cool before filling them with the pudding.

Whisk together cornstarch, sugar, cocoa powder and salt in a 2 qt. saucepan.  I used a double boiler.  Whisk in the milk and bring to boil over medium heat(if you are using a double boiler use high heat to keep the water boiling). Bring the pudding to a boil and boil for two minutes.  If using a double boiler it will not come to a boil just  thicken beautifully.  Remove from heat and stir in Chocolate and vanilla.  Pour immediately into a cooled pie shell.  Remember not to over stir because it will cause the pudding to thin out!!!  Cover with wax paper to prevent a skin from forming. Refrigerate for at least 2 hours.

Just before serving, prepare whipped cream.  Beat 1 1/2 cups of heavy whipping cream until thick then gradually add about 2 tablespoons of powdered sugar.  Whip until nice and thick.  The cream will hold a peak when the beaters are lifted.  I like to top the pie after I cut it.  It is easier to make a pretty slice.  The leftover whipped cream can be left in the refrigerator for up to 4 days and you can bring it back to life by beating very hard with a wire whisk.

Just a note I kept the pie in the refrigerator for four days and topped with whipped cream and it was still delicious.  The crust was just not as crisp.

Here is the picture of the second pie that I made.  I just found it very difficult to cut with the whipped topping on it. 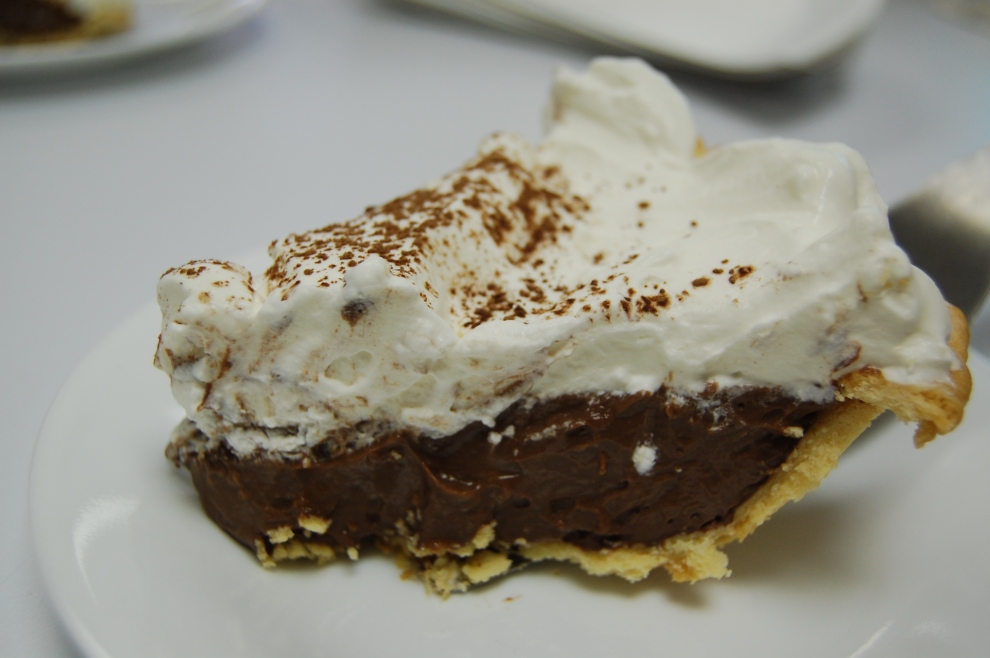 88 responses to “Chocolate Pudding Pie and a Lesson Learned!”